For a limited time, take 25% off immune & allergy tests with code IMMUNE25. Valid through 04/09.SHOP TESTS

Celiac Disease and Lactose Intolerance: What You Need to Know

If you have celiac disease, you may be at an increased risk of developing lactose intolerance, a condition in which your body can’t break down or absorb lactose–a type of sugar present in milk and dairy products.

There’s a growing body of research that seems to indicate celiac disease is more prevalent in people with lactose intolerance than in the general population.

The other way around also seems to be true, with most newly diagnosed celiacs soon discovering that they also have a secondary lactose intolerance, the symptoms of which typically disappear once they go onto a gluten-free diet.

In short, going gluten-free means your body can rest and heal, enabling you to tolerate lactose; in some cases, an early gluten-free diet once you know you’re celiac, can avoid you developing lactose intolerance in the first place.

In this article, we’ll discuss what you need to know about the connection between celiac disease and lactose intolerance.

What is Lactose Intolerance?

When you are lactose intolerant, either your body has insufficient enzymes to digest lactose, or your digestive system is unable to properly absorb it into the bloodstream. Lactose is a type of carbohydrate found primarily in milk, yogurt, cheese, ice cream, butter, and other dairy products and derivatives.

Lactose intolerance is a very common digestive condition affecting roughly three-quarters of the global population; it is often linked to having untreated celiac disease.

Symptoms of lactose intolerance normally show up a few hours after you consume anything with lactose, whether that’s a drink or food, and even small traces can have a dramatic adverse effect. The most common symptoms are digestive issues such as diarrhea, stomach cramps, gas, bloating, and–sometimes–nausea and/or vomiting.

The severity of these symptoms depends on the amount of lactose you have taken and how much your body can tolerate. Everyone’s different; in some people, a small amount of lactose may trigger the symptoms, while others have to consume large amounts of dairy before they experience digestive issues.

Is Lactose Intolerance an Allergy?

Lactose intolerance isn’t the same thing as a dairy or milk allergy.

Unlike food intolerances in which your body can’t digest or absorb certain food ingredients, food allergies occur when your immune system reacts negatively to the presence of a specific food type, such as gluten, eggs, peanuts, shellfish, wheat, and tree nuts, among others.

If you are allergic to a certain type of food, even a small speck of the food may be enough to cause a massive allergic reaction.

Someone with lactose intolerance, on the other hand, can still eat a small amount of lactose-containing food without experiencing highly adverse symptoms, as mentioned earlier. Find out more about the difference between food intolerance and food allergy.

How is Lactose Intolerance Treated?

As in the case of the majority of intolerances, there’s no known cure for lactose intolerance, the most effective treatment usually involving cutting dairy (milk and milk products/derivatives) from your diet to control or reverse the symptoms.

Unfortunately, dairy products are often rich in important nutrients such as:

All of which are essential for your health and well-being.

For example, including dairy in your diet has been shown to reduce the risk of obesity, heart disease, and type-2 diabetes. There’s also a connection between higher bone density and consuming dairy, which reduces the chances of bone fractures and developing osteoporosis in senior adults.

For this reason, your physician may recommend that you take calcium and vitamin D supplements on top of avoiding dairy products. Your doctor may also prescribe lactase tablets or drops that you consume with your meals to improve the breakdown of lactose in the digestive system. Bear in mind that since celiac disease to some degree impedes the body’s ability to intake and process nutrients, you’ll need to follow your doctor’s guidance to the letter and take all supplements correctly.

The Connection between Celiac Disease and Lactose Intolerance

Many people are confused about ‘gluten’ and ‘gluten-free’ and wonder if this is the same as ‘lactose’ and ‘lactose intolerance’. It’s not–but the two are inextricably linked.
When you’re celiac, it’s absolutely vital to avoid ingesting gluten, a protein type found mostly in grain cereals such as rye, barley, and wheat, and wheat hybrids like spelt and durum.

If you have celiac disease and continue consuming gluten, your immune system will react adversely, elevating your risk of developing health complications including lactose intolerance, irritable bowel disease (IBD), dermatitis herpetiformis (a form of itchy skin rash), malnutrition, type-1 diabetes, and cancer, to name but a few.

So, while gluten and lactose certainly aren’t the same thing, being celiac and consuming gluten will often lead to problems with digesting lactose too. It’s the intestinal inflammation that causes a secondary lactose intolerance, so many of your lactose-intolerant symptoms could disappear if you can stick to a strict, no-gluten diet.

Let’s now talk about children with celiac disease who may suffer from serious complications such as stunted growth or weight loss, delayed puberty, and neurological disorders, while some have an increased risk of developing Down’s syndrome, Juvenile Chronic Arthritis, Autoimmune Thyroiditis, and Turner’s syndrome.

Just as with adults, celiac kids are also highly prone to developing lactose intolerance–and they often love dairy products! So this makes it extremely important to get your child assessed and diagnosed promptly if you notice a lactose intolerance since your child may have celiac disease, and the sooner it’s spotted, the better.

How does Celiac Disease Cause Lactose Intolerance?

So, are you wondering how and why lactose intolerance develops in celiacs, to begin with? It all boils down to the fact that celiac disease is an autoimmune disorder mainly affecting the small intestine – or villi and microvilli, to be exact.

Villi are tiny, finger-like structures that line the inner wall of the small bowel, and their chief role is to absorb vitamins, minerals, and an array of other nutrients into the body. Each villus, in turn, comprises specialized cells with microvilli (also known as brush border), even tinier, hair-like projections.

It so happens that enzymes that break down sugars, as well as some protein products, are found in these microvilli. These enzymes are collectively known as brush border enzymes and they include:

When you have untreated or undiagnosed celiac disease, eating gluten causes extensive damage to the lining of your small bowel. To be more specific, the immune attack causes villi and microvilli to become short.

Eventually, the villi become completely flattened, significantly reducing their ability to function properly and effectively absorb nutrients from the foods you eat. This also reduces the number of brush border enzymes, particularly lactase.

Because lactase has the lowest brush border prevalence, it’s always the first to be impacted by untreated celiac disease. That’s why celiacs suffer lactose intolerance more commonly than sucrose or maltose intolerances.

Technically, lactase helps break down lactose into two basic sugars known as monosaccharides ⁠— namely galactose and glucose, both of which can be absorbed into the bloodstream without any problem.

Because of villi damage, however, undigested lactose is forced to go down the gastrointestinal tract where it’s mixed with gut content and fermented by bacteria. This leads to gas buildup, flatulence, and diarrhea.

Since celiac disease is the primary cause of lactose intolerance, there’s only one possible solution: switching to that gluten-free diet mentioned earlier. The above-mentioned digestive problems normally go away once you get rid of gluten from your diet; now, your damaged small intestines can heal.

It’s not all rosy, unfortunately; some people do continue experiencing symptoms of lactose intolerance for months if not years after going 100% gluten-free. It all depends on the extent of the damage and how long it takes for the damaged villi and brush border to grow back. Just be assured that by making the gluten-free step, you will improve gradually.

In a lot of cases, lactose intolerance disappears completely after 6-12 months, while in some cases the villi and microvilli might take up two years to fully heal.

It’s worth mentioning that most adults also become lactose intolerant because they are genetically predisposed to develop a lactase deficiency. The vast majority of lactose intolerance cases in people aged 20-plus are inherited and chronic, if not lifelong.

On the other hand, lactose intolerance caused by celiac disease can occur at any time when the villi and microvilli are too damaged to digest lactose. This form is also temporary, going away following a gluten-free treatment.

Similarly, in children, some cases of lactose intolerance can be caused by gastrointestinal tract infections, and not always because of celiac disease.

Physicians recommend that people found to be lactose intolerant during celiac disease diagnosis should be re-tested after remaining gluten-free for longer than a year. Sometimes, brush border enzymes levels have improved so much so that they can safely take dairy products again.

It’s important to note that since celiac disease symptoms can be similar to those of several other conditions–not least Irritable Bowel Syndrome–it’s crucial that you get tested for celiac disease and lactose intolerance before removing gluten and dairy from your diet.

You’ll be glad to know that the imaware™ at-home blood testing kit can help you screen for celiac disease right from the comfort of your home in under five minutes! 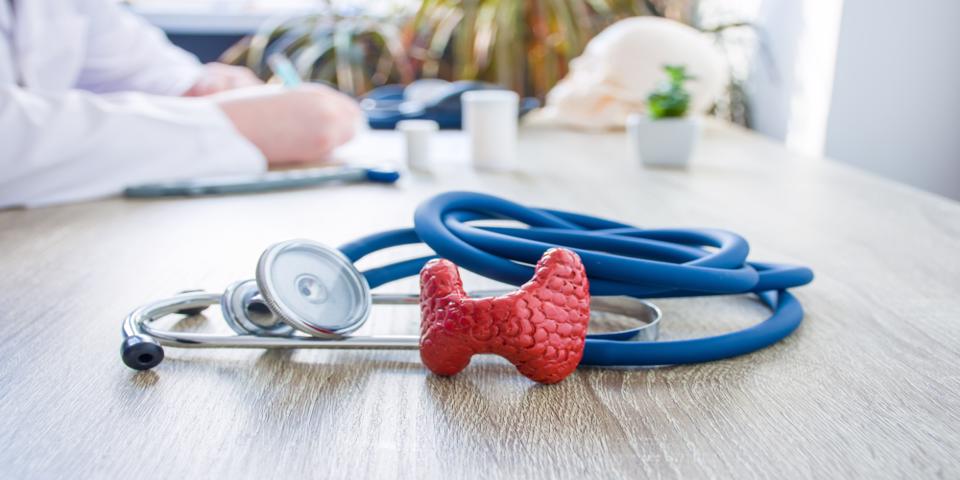 The Link Between Celiac Disease and Thyroid Conditions

Today, thyroid conditions affect approximately 20 million people in the U.S. alone, and there is a connection to celiac disease.

From our inflammatory responses to pathogens to our clever retorts to insults, humans have developed all sorts of novel ways of protecting ourselves against threats, both real and perceived.