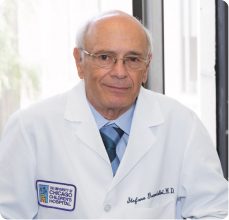 [If you haven't yet read part one of our Q&A with Dr. Stefano Guandalini, you can read that here.]

Q: If I have celiac disease, how often do my children need to be tested for celiac?

A: Great question! Once you are diagnosed, you should have all first degree relatives screened for celiac disease. This includes any children, over the age of 3 (sooner, if there are symptoms suggestive of celiac!). Testing for the genetic compatibility for celiac may also be a good idea, as there are chances (though not many) that one or more of your children may not carry the genes that create the susceptibility to celiac. After the first negative serology testing, a genetically-compatible child should be screened about every 3 years, unless of course symptoms develop. Remember, screening for celiac needs to be done - to be valid - while eating gluten.

Q: Are there symptoms of celiac disease that can linger even when the person has been on a strict gluten free diet for years?

A: Most, if not all, symptoms should be relieved on a gluten-free diet. Typically, GI symptoms regress sooner than extra-intestinal manifestations. Also, the time needed for this varies between children (faster) and adults (slower). That said, we now know that in some cases (up to about a sixth of children and a third of adults) symptoms may indeed persist longer despite a gluten-free diet, even after improvement of the serology. Studies have shown that there may be many different reasons for this, the most common of which remains the ongoing inadvertent ingestion of small amounts of gluten.

Q: How come Graves Disease isn’t included as one of the screening pull downs for the celiac test intake form? It was my understanding that all autoimmune thyroid diseases increased the likelihood of celiac (not just hypothyroidism)

Q: Why is it that the better I am at avoiding gluten, the worse I react when I do get glutened?"

A: It’s a common question to ask because it’s a little strange - but it’s true. The longer you avoid gluten, the better you feel. Your villi are finally healing and then they’re hit with a dose of gluten, they may overreact. Also, it might be that once you’ve recovered and you’re used to feeling better, it might feel strange to feel bad again once you’ve accidentally consumed gluten. This evidence is anecdotal, but we see it time and time again throughout working with celiac disease patients.

Q: Has there been any known instances of celiac disease flareup due to either a COVID-19 infection or a COVID-19 vaccine?

A: It’s an unfortunate story that we hear too often. Celiac disease has been around for a long time - it was clearly described for the first time by Aretyaeus of Cappadocia in the 1st century BC! However, even in 2021, some providers are not used to diagnosing it outside of the classic symptoms of malnourishment, bloated belly, and diarrhea. We now know there are many symptoms outside of these. Keep in mind that gastroenterology is a large field, and doctors can have many specialties in different organs like the stomach, liver, large intestine or small intestine. They have a specialty outside of celiac disease, and may fail to suspect it and properly look for it. There are many celiac disease centers across the country, and you can ask hospitals near you if they have a celiac specialist on staff.

As for the DQ7 (A*0505/1), this gene can mediate celiac disease but only if the gene HLA DQ2.2 is also present. Remember, there must still be a trigger to cause these genes to activate celiac disease. The main - and necessary - trigger is of course eating gluten. But in addition,  there is also epigenetics, or how the world around you influences your genes. That is why the gold standard for celiac disease diagnosis is a blood test screener and then a small intestine biopsy - all still while eating gluten. The gene test is primarily helpful to rule out those who do not have celiac disease, or to gauge the risk level of the genes you do have. I am sorry that your sister does not want to be tested. That simple screening blood test is not a big deal, and the rewards it can have in terms of well-being (if celiac is diagnosed and properly treated) are invaluable!

Q: My 10-year-old son was diagnosed at 6 with celiac disease. He also has three other AI diseases, immunodeficiency, and autism. Wondering if there's a link between the ASD and the immunodeficiency.

A: It’s a muddy relationship.There have been links to autism and autoimmunity, but there are no major takeaways yet on how to put this research into everyday use. In fact, no studies have convincingly shown a link between celiac disease and autism, although it is true that celiac disease in children can present with behavioral symptoms and signs very similar to autism. As for immunodeficiency, the only well known association is with IgA deficiency, which occurs much more frequently in celiac individuals than in controls.

Q: Before I take my imaware™ Celiac Screening Test, should I be eating gluten daily? If I’ve been off of gluten for several days, would that impact the findings?

A: Unfortunately it’s not an exact science when it comes to going back on a gluten-containing diet before taking any screening test for celiac. This is why we advise everyone to continue eating gluten and getting screened before going gluten free. Being off of gluten for a few days (maybe even a week or two) should not impact your blood test. Being off for longer, however, may be risky. In that case, I would suggest you go back on a gluten-containing diet for at least  several weeks before taking the test. Unfortunately that means having to eat gluten daily, at least a few crackers or a slice of bread or two, to have positive results on the blood screening. You’ll also have to continue to eat gluten when you have an upper endoscopy and biopsy for the gold standard diagnosis of celiac disease.

Q: I’ve had vitamin deficiencies due to my celiac disease, including B12, Vitamin E, Zinc and folate. How often should those levels get tested?

A: Having nutritional deficiencies at the time of celiac disease diagnosis is common. The villi in your small intestine do a great job of absorbing nutrients, but when they are blunted, they can’t absorb properly. After the initial testing, your doctor should recommend what specific vitamins and nutrients should be supplemented and for how long; typically, we re-check some of these parameters after 3-4 months on a gluten-free diet, and then again after a year if they have normalized. Further measurements can be done on a yearly basis, or at least every 2-3 years.

Q: What is your opinion about food that is not certified gluten-free, but does not include wheat, rye, or barley in the ingredients. I don't want to be hypervigilant, nor negligent. I'm trying to set an equilibrated criteria. I'm a mom of a 7 year old with celiac disease that has been well controlled for years.

A: Gluten-free foods have been the only type of food for humankind for about 300.000 years, until the agricultural revolution of some 10,000 years ago introduced the cultivation of cereals. Then, foods manufactured to be gluten free were introduced in the late 1960’s. Only in 2014 was the term “gluten free” regulated by the FDA, and limited to 20 ppm (parts per million), i.e. 20 mg every 2.2 pounds. This is a very small amount that can be measured using laboratory tests by food manufacturers. Under 20ppm of gluten found in a product is thus accepted worldwide as perfectly safe for those with celiac disease. The FDA also regulated what ingredients can be labeled gluten free - or not. Thankfully now those with celiac disease can trust products that are labeled gluten-free to be regulated.

While this law is not perfect, and the FDA has many other things to worry about besides the amount of gluten in products, there is a set standard for food manufacturers to use in labeling food. Food that is labeled “gluten free” legally needs to have no more than 20 ppm of gluten. While it is nice to have a product certified gluten free from any of the major certification organizations, it is not a requirement for a food to be considered safe for those with celiac disease. Think of the hundreds of naturally GF foods that are available: meats, poultry, eggs, fish and seafood, vegetables, fruit, and even many cereals like rice, corn, quinoa! I agree with having a balanced, equilibrated approach to the GF diet: one must maintain a balance between safety and quality of life. Hypervigilance is no way to go through life, but it’s important to be aware of the food you are eating.

7 Foods That Cause Bloating & Gas The Most